The mural on Durnish Road was jointly funded through the Housing Executive’s community involvement grant and Antrim and Newtownabbey Borough Council (ANBC) with the aim of broader environmental improvements, promoting diversity within the sport and raising aspirations within the Springfarm and wider community.

“I’m delighted to be featured in this mural by Visual Waste and hope it can inspire young people in Antrim and beyond to get involved in sport. Growing up in Tiger’s Bay, boxing kept me out of trouble.

“I have no doubt things could have been very different for me if it wasn’t for boxing. Getting involved in sport can change your life and I’d urge anyone to get involved.

"Well done to the Housing Executive and ANBC for funding this project.”

Kane, who braved the freezing temperatures to deliver the project on schedule, said: “This was a challenging piece due to the cold weather, the paint doesn’t always adhere well in these conditions but we got there in the end.

“I’m delighted with how it turned out and pleased to be part of this project which helps promote sport in the local community. Thanks to funding from our partners for helping to make it possible.”

“Dean’s artwork has improved the area and it’s great to see two heroes of sport featured on the wall.

“We are proud to have been involved with helping Antrim Boxing Club and the local community and hope that this mural gives young people in the area something positive to aspire to when they see Carl and Katie up there.” 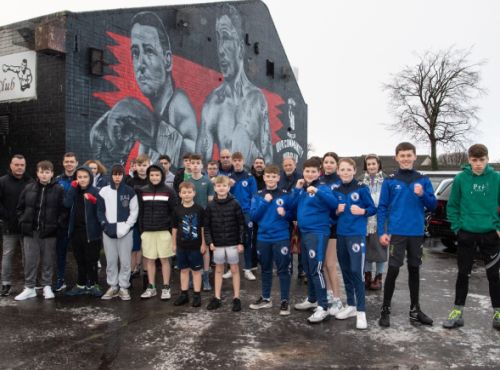 Members of Antrim Boxing Club at the mural.

“Antrim Boxing Club, in conjunction with the Springfarm community, would like to thank our funding partners, the Housing Executive, the Executive Office, T:BUC, and Antrim and Newtownabbey Borough Council, for helping to deliver this fantastic project which is part of ongoing environmental improvements within the community.

“We also wish to thank Visual Waste's Dean Kane for his imagination and hard work in bringing this design to life.

“Carl Frampton and Katie Taylor are iconic boxers within Irish boxing and represent aspirations and dreams for young people who wish to pursue sport as a career.

"Their success is the stuff of dreams.”